The spate of recent blow ups of oil wells by militants in the Deltan region of the country is a cause for concern. The attacks have left the nation's economy crunched, with dwindling revenues from the downstream sector. The nation also has the problem of Boko haram that has claimed responsibility for several attacks. But, Militants' operations in the creeks seem to have taken over the dreadful activities of the extremist islamic sect, Boko haram. 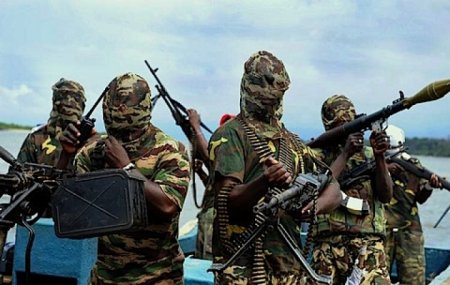 Here is a quick look at 10 reasons why the Niger Delta Militants may be more dangerous than the dying Boko Haram.
---
1. Boko Haram's demands are religion-centric. It's either their belief or no other. Baseless enough to have drawn attentions of international bodies making it easy to curb. Niger Delta militants demands are well spelt-out and arduous to achieve by the Federal Government. International bodies will only advise.

2. Boko Haram was managed for over five years by the Nigerian government yet the economy was only gradually sinking. Niger Delta militants are fast attacking and the implications are gross on the national economy.

3. Even Muslim loyals are no symphatizers of Boko Haram. Niger Delta militants have always had one or the other. Some South leaders believe in their course.

4. Niger Delta militants have always striven from generations to generations. From Obasanjo's Regime to Yar'Adua down the lane to Buhari's adminstration.

5. Even when they were granted amnesty during Umar Musa Yar'adua's regime, they still came upon irritations with the present administration. Boko Haram has not even been offered Amnesty yet they flee sometimes to other countries upon fierce close-up on them.

6. Federal Government is still dreadful of negotiating with the militants in spite of their multi-identities. There is Niger Delta Avengers, Ultimate Warriors, Egbesu Boys, Indigenous People of Biafra and other upcoming ones. Boko Haram is just a singular network. US intelligence confirmed a non-connection with Al-Quaeda.

7. Niger Delta is soaked with Nigeria's greatest explored resources, that is oil. The militants threaten with that always. Enough to paralyze Nigeria's economy immensely than the North's yields for the country.

8. Boko Haram is based in Nigeria, Cameroon, Niger and Chad. They face hell from all of these countries limiting their chances. Niger Delta Militants attack only in Niger Delta regions only making it quite easy for the groups to gather momentum always.

9. Boko Haram location in Nigeria is known and even land-based. Niger Delta militants are not shadows but housed by their people, operating from the land and also from the waters.