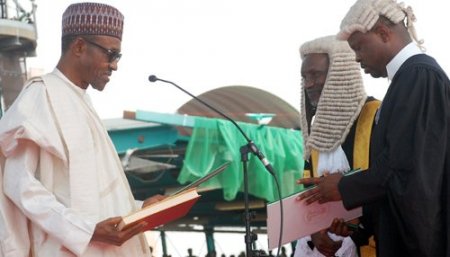 Twelve months ago, President Muhammadu Buhari was sworn in as the President and Commander-in-Chief of the Armed Forces of the Federal Republic of Nigeria.

He came to power following the decisive victory of his party, the All Progressives Congress, APC over the ruling People’s Democratic Party, PDP and its candidate, Dr. Goodluck Ebele Jonathan. The victory ended the 16-year reign of the PDP.

President Buhari campaigned on a promise to fight Boko Haram terrorism and secure the whole country, fight corruption and develop the economy to the point that it creates jobs for the teeming unemployed.

Here are highlights of the 9 points:

1.Promise of Transparency and Accountability

Senior Special Assistant to the President

Jan 2, 2020
ese
E
E
Politics Garba Shehu: It’s not wrong to have a cabal at the presidency - The cable