Politics How Buhari Shocked Some Ministers With Portfolios

According to The Nation source, President Muhammadu Buhari did not assign key portfolios to some ministers following security reports, it was learnt yesterday.

He placed priority on expertise and performance in assigning portfolios to ministers, sources said.

The President was also said to have disappointed some of those who lobbied for “strategic” ministries.

Ministers may be placed under watch and anyone who gets into trouble will be dropped, it was learnt. 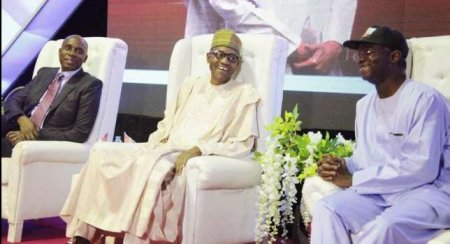 According to sources, until the inauguration time, the list of portfolios was known to only Buhari and members of his “kitchen cabinet”.

The list was kept under wraps in such a tidy manner that even the Office of the Secretary to the Government of the Federation and the President’s aides were unaware.

Six factors, which informed the assignment of portfolios, were security reports, less exposure to politics, priority on expertise and performance, ongoing investigations of some appointees and distaste for lobbying and media profiling by some appointees ; and Buhari’s military background which sent signal to ministers that no one is assured of any position in his cabinet.

The outcome of the “surveillance” was presented to the President and his kitchen cabinet in deciding the choice of portfolios.

A source, who spoke in confidence last night, said: “Most of us, including the ministers themselves, were shocked when the portfolios were announced. In fact, some ministers were just unstable. The President and his inner cabinet kept the list secret. They didn’t allow it to leak at all.

“If the portfolios had been made available to any other office or desk, we would have known. So, the President used his military background to send the first message to the ministers that he has no favourite and they should always expect surprises.

“From the way the President assigned portfolios, nothing is settled on any minister. If anybody gets into trouble, he will not spare him or her.”

The source also spoke on security reports on the ministers as accounting for the outlook of the portfolios.

The source added: “There were reports that a minister had already formed a power cult around himself, such that those expected to serve under him had been paying obeisance.

“Another minister was holding discussions with some foreign partners based on assumption that a particular ministry had been conceded to him.

“Some ministers were openly telling friends, associates, party leaders and even key aides to the President that they will be in charge of some ministries.

“With security apparatchik and communication advantage, you know the President has access to more information than anyone else. He picked some of these information and decided to surprise these ministers.

Responding to a question, the source said: “You cannot rule out the fact that there are some ministers who did not get what they would have thought to be commensurate portfolios. But that is the working of the government for you.”

The source added that security reports made the President to concede some portfolios to a few ministers – to challenge their competence.

Ministers with surprising portfolios following last-minute decisions by the kitchen cabinet include Adamu Adamu(Education); Adebayo Shittu(Communications); Usani Usani(Niger Delta Affairs); Monsur Dan-Ali(Defence); Geoffrey Onyeama(Foreign Affairs); and Cladius Daramola (Minister of State for Niger Delta), who was said to have been billed for the Education ministry.

Another source also indicated that the President applied expertise and performance target in allotting portfolios to some ministers.

The second source added: “The thinking of the President is that most of those in this group, with the exception of Amaechi, have no political ambition in the nearest future. They are mostly experts who can deliver on the key areas of governance which can make the change he promised to the nation a reality. What Amaechi has going for him is vitality or energy to serve and knack for quality projects.

“With these experts manning vital ministries, there will be less pressure on them from politicians and hangers on. Their assignments alone will preoccupy them.

“So, their portfolios were based on a performance driven target.

A government source also claimed that some of the ongoing investigations of some ministers and the attitude of some and lobbying by some contributed to the nature of the portfolios given to them.

“For instance, there are two or three ministers with issues. A few others sent emissaries and some erroneously confided in a few people close to the President that they will be in charge of some ministries.

“The President decided to prove them wrong completely.”

Asked to describe the atmosphere after the portfolios were announced, the top government official simply said: “Some ministers were certainly weak.”