January 15 is here again, a day set aside to commemorate the Armed Forces Remembrance Day in Nigeria. What a wonderful way to remember and celebrate our fallen heroes – the soldiers who lost their lives in the cause of defending our country and to appreciate the survivors – the legionnaires who have been grinding on in despair due to neglect and unpaid pensions which have incapacitated them socially and financially over the years.

In Nigeria, Armed Forces Day, also known as Remembrance Day, is celebrated on 15 January. It was formerly celebrated on 11 November of every year to coincide with the Remembrance Day (Poppy Day) for the World War II veterans in the British Commonwealth of Nations. But it was changed to 15 January in Nigeria in commemoration of the surrender of Biafran troops to the Federal troops on 15 January 1970, thus concluding the Nigerian Civil War that sought to tear apart the unity of Nigeria.

NigerianBulletin reveals five things you need to know about the Day:

- In Nigeria, the event was initially marked with a national holiday on the 12th of November and later on the 11th of November (popularly known as 11-11 or POPPY day) so that it coincided with the World War II Veterans’ Remembrance Day in the British Commonwealth of Nations.

- It was changed to January 15th in memorial of the surrender of Biafran troops to the Federal troops which took place on the 15th of January, 1970, bringing an end to the Nigerian Civil War.

- Today’s “Army Day” is a special one in that it also marks the 50th anniversary of the first military coup ever executed on the Nigerian soil. Staged by Major Chukwuma Kaduna Nzeogwu and four other army majors on January 15, 1966, the coup triggered a chain of other events that eventually snowballed into the fratricidal war of 1967 to 1970.

- Officers and men of the Nigerian Armed Forces have fought in various wars and taken part in many peace keeping operations, defensive duties and internal security duties. 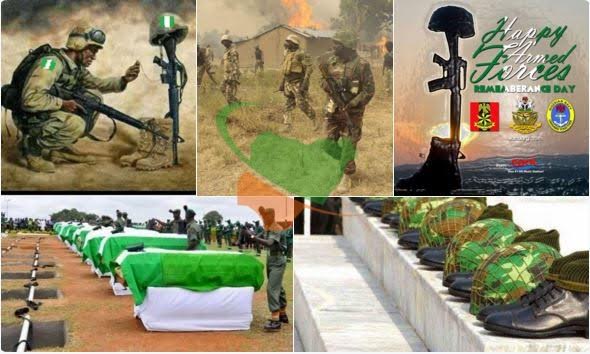 - President Mohammadu Buhari described the theme of this year’s celebration, “Motivating the Nigerian Armed Forces for Effective Service Delivery” as apt, particularly as the nation was passing through what he described as trying times.

On behalf of the Nigerian Bulletin team, We Salute the Patriotic efforts of our brothers and sisters in the Military.
God bless them!